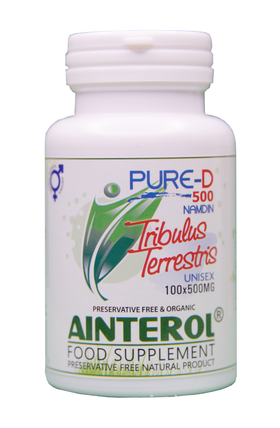 SOLD FOR SO LONG AS IT LASTS! ONCE IT'S SOLD OUT WE REMOVE IT FROM SALES. WE FOCUS ON NEW BLACK BUTEA SUPERBA

The Greeks used the medicinal herb Tribulus Terrestris as a diuretic and a mood-enhancer. Eastern Indians used it as a diuretic, antiseptic, and anti-inflammatory. Tribulus is mentioned in ancient China and Indian Ayurvedic texts dating back thousands of years. The Chinese have used Tribulus in their Materia Medica for over 400 years and various liver, kidney, dizziness, psoriasis, eczema, premature ejaculation, and cardiovascular diseases. The people of Bulgaria used Tribulus Terrestris as a sex enhancer and to treat infertility.

Dosage: A typical dosage of 250-1500 mg of Tribulus per day is relatively standard. Suppose used together with Tung Saw (Tongkat Ali), Krachaidam, or Butea Superba. A daily dosage of 2x500mg of Namdin 500 is enough.

Tribulus Terrestris is used in various herbal formulas to treat headaches, eye problems such as itching, conjunctivitis, and weak vision, pain relief, enhancement of the immune system, improved mood and sense of well-being, cholesterol reduction, and ease of premenstrual (PMS), menopausal symptoms in women, and nervousness making it an excellent menopause herb. In women, hormonal imbalances can lead to typical symptoms of PMS and menopause. It is also used to treat high blood pressure and rib pain. Recently, eastern European athletes and strength champions have used it as well. Many athletes and bodybuilders have found Tribulus a safe and natural alternative to anabolic steroids. Tribulus is beneficial given the typical western diet where the liver is overburdened by too much sugar and fat. The overall effect is that Tribulus Terrestris leads to a more balanced hormonal system in both men and women. Tribulus stimulates the bile flow and breakdown of fats in the liver, thus contributing to a more regular bowel pattern and effectively eliminating toxins from the liver. More efficient fat metabolism can make the blood less "sticky," consequently benefiting blood pressure. Improved fat metabolism also helps oxygenation, creating energy within the cells for use in the body.

As for side effects, about one in ten people have associated some gastrointestinal upset with taking Tribulus Terrestris. Taking food can minimize these effects if you are one in ten. No known adverse effects presently exist when Tribulus is used as a dietary supplement. Tribulus exhibits a mild diuretic effect. Using Tribulus can help to counter the vasoconstricting effects of caffeine and nicotine.

Tribulus Terrestris contains three active phytochemicals: Dioscin, protodioscin, and diosgenin. These substances affect sexual performance and may treat various sexual disorders. They regulate sexual energy level and strength by increasing the free testosterone level for men, affecting women. The hormone balancing effects of Bulgarian Tribulus Terrestris for women make this herb suitable for premenstrual syndrome and menopausal syndrome. Sterols like sitosterols or stigma substances protect the prostate from swelling and, in combination with the X steroidal saponins, protect the prostate from cancer.

In another study, treatment with 750 mg per day for 60 days significantly increased sperm motility in 38 men with idiopathic oligospermia (low sperm count of unknown origin). In the same study, of 14 patients with reduced libido, 12 showed considerable improvement after 30 days (1500 mg/day), and one was slightly improved after 60 days' treatment. Libido was improved in 27 of 36 patients with chronic prostatitis. Patients who had suffered this condition for five years showed no improvement, yet libido was enhanced in patients with shrunken testes and oligospermia. A study involving healthy individuals taking 750 mg/day of Tribulus Terrestris evaluated hormonal responses and revealed LH increased in males from 14.38 ml/U/ml to 24.75 ml/U/ml (that s a 72% increase). The free testosterone in males went from 60 ng/dl to 84.5 ng/dl (a rise of 41%).

Studies have confirmed the safety and efficacy of Tribulus Terrestris when taken as prescribed.  Case studies of Tribulus Terrestris and menopause formula, conducted over two months, involving 30 women, ages 17 to 42, had the following results: 28 of the 30 women who tested Tribulus Terrestris, using 2 to 3 tablets per day at the first indication of PMS symptoms (irritability, headaches, cramping, bloating, low back pain, etc.), found relief from most, if not all, signs. Relief was noted within a few hours to the end of the first day of usage. In some cases, the second day pointed out a replacement of symptoms. With regular use of Tribulus Terrestris (no more than three capsules per day), the following additional benefits were reported:

Those women involved in a regular exercise program reported significant increases in strength, endurance, and conversion of body fat to lean muscle mass.  Case studies on Tribulus Terrestris, traditional formula, conducted over two months, involving 20 male and female students of a martial arts school, ages 24 to 41, had the following results:

The recommended amount of the principal active components, the steroidal saponins, is about 115 mg (the equivalent of a 250-mg serving of a 45% Tribulus extract) two to three times a day.

Not only does it affect the way you look, but testosterone also affects the way you feel. Because the human brain is loaded with testosterone receptors (the parts of the brain that respond to testosterone), your behavior is affected if testosterone levels drop too low. Termed by some as "irritable male syndrome," the age-related decline in testosterone might explain why some men become grumpy and irritable the older they get.  When men who cannot produce testosterone come off hormone replacement therapy, they become irritable and depressed. Their mood improves when they resume treatment. According to David Abbott of the Wisconsin Regional Primate Research Center in Madison, "Testosterone effects have been missed. When someone gets grumpy and irritable, [researchers] try and explain it only in terms of cortisol levels and depression. They ignore the fact that their testosterone levels are probably low as well."

Although one mechanism by which Tribulus works is by stimulating LH, which in turn can elevate testosterone levels, the primary mechanism of Tribulus is to restore testosterone receptor sensitivity. In other words, to enable your body to utilize whatever testosterone is there better and more efficiently. If Tribulus does elevate testosterone (in addition to making it work better), it will likely do so within physiological limits; it will not raise them to abnormal levels. Tribulus is not a prohormone but more of a secretagogue or a manager that helps with secretion. Low testosterone levels may also be responsible for symptoms of sexual dysfunction such as premature ejaculation and low sex drive. Testosterone replacement therapy offers older men an opportunity to experience a sense of vitality and well-being again.

If you miss a dose of Namdin 500, take it as soon as you can. If it is almost time for your next dose, skip the missed dose and return to your regular dosing schedule. Storage Store Namdin500 at room temperature, between 68-77°F (20-25°C). Store away from heat, moisture, and direct sunlight. Keep BSC out of the reach of children. When opened, best usage in 8 months. Close cap well after use. Even though we are NOT dealing with chemical medicine, you should carefully read all warnings and precautions. Namdin is a powerful herb, and better to know all possible scenarios to avoid problems.

What may happen after the first few dosages are increased blood flow, and it may cause flushes in your face. People who have or suspect a peptic ulcer may experience bloating and abdominal fullness during the first 2 to 3 weeks. In the case of a peptic ulcer, you can start with one capsule per day for the first 2-3 weeks. After 2-3 weeks' time period increase to 2 capsules.

NOTE: Statements are not evaluated by US Food and Drug Administration. Products are not intended to diagnose, treat, cure or prevent any disease.

At the same price!

Statements are not evaluated by US Food and Drug Administration. Products are not intended to
diagnose, treat, cure or prevent any disease.